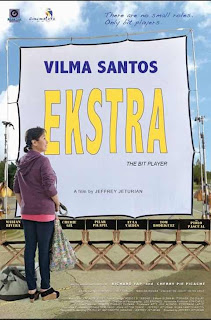 Vilma Santos in her long and illustrious career in cinema has her playing a stripper (BURLESK QUEEN), a dying woman (DAHIL MAHAL KITA, PAHIRAM NG ISANG UMAGA), the other woman (RELASYON), a superhero (DARNA), a freedom fighter (SISTER STELLA L), countless mothers (ANAK, BATA BATA PAANO KA GINAWA, DEKADA '70, IN MY LIFE) and sometimes even a tormentor (SINASAMBA KITA) yet what EKSTRA, her new indie film offers is something we have never seen Vilma do- underacting. The role demands it, and Vilma more than handsomely gives her finest performance as a bit player.

The screenplay, penned by Jeffrey Jeturian (TUHOG, KUBRADOR), Antoinette Jadaone (SIX DEGREES OF SEPARATION FROM LILIA CUNTAPAY), and Zig Dulay (HULING HALIK) is peppered with countless dashes of humor, that even non-workers in the entertainment industry will find funny. For those who work or have worked in the entertainment industry/similar media, the laughs will be relentless. The one-liners and the sarcasm explode like time bomb. Watch out for Vincent De Jesus (who plays the Assistant Director or "AD" in the movie). Heck, even Ate Vi exacts her subtle brand of humor in this movie.

For those of us working in the media, EKSTRA hits home, chillingly home. We know how the  production staff gets irate faster than Taylor Swift can write a song about an ex-boyfriend because they, too get scolded by their superiors. The director verbally assaults the AD; the AD tortures the casting director and the production assistant (PA); the PA harasses the talents and the talents cannot complain simply because they have none under them- they are the bottom of the food chain, the lowest of the low. Even the caterers take them for granted.

We know all of this because we've experienced it, one way or another.

As Loida Malabanan, Ate Vi shines even in anonymity. She is supposed to fade into the background, not outshine the "stars" and just do what is assigned her- to be a bit player. But even in the crowd, Ate Vi makes Loida stand out. She gives Loida the bit player enough motivation, and a poignant love for the acting craft that she has forever changed the image of the bit player, in the same way that she redefined the term "mistress" when she did Ishmael Bernal's RELASYON way back.

For the director, the staff and the big stars, Loida is a nobody. But for us, the audience, we recognize Loida's magnanimity. Watch out for that pivotal scene in the third act where Loida, and us the audience learns the true meaning of ingratitude in the media.

EKSTRA is Vilma's movie. We cannot imagine any other actress for her role. At the end of the day, as Loida descends from the jeepney, and prepares to go to bed just about when everyone is supposed to go to work, we feel exhausted. It's not the physical work that made us tired, but the system of a dog eat dog society.

Filmmaker Jeffrey Jeturian, through Loida exposes the hypocrisy of the thankless and unjust world of entertainment, and after that whole bout of laughing and laughing and crying afterwards, we are forever changed. Yeah right, like you didn't already know you were gonna cry after seeing the trailer.

EKSTRA, in all boldness and certainty is the best Filipino film of the year, so far. Some often compare it to Jadaone's 2011 mockumentary SIX DEGREES OF SEPARATION FROM LILIA CUNTAPAY, and I admit that there are obvious similarities, but EKSTRA and SIX DEGREES are in different leagues of their own. EKSTRA is the ultimate tribute to the millions of bit players in the industry, made even more grandiose by having "the star for all seasons" play as one of them.

Popular posts from this blog 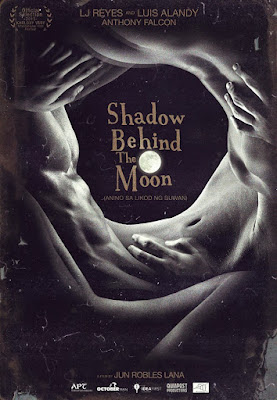 * English title "Shadow behind the Moon" The best term to describe Jun Lana's latest film would be a cinematic charade- a game of identities, of motives, of suppressed passions, and of uncertainty. Or the film equivalent of a Russian doll, if you will. "Anino sa Likod ng Buwan" only has three characters- husband and wife Nando (Anthony Falcon) and Emma (LJ Reyes) and military man Joel (Luis Alandy). What started as a seemingly routine banter among friends gradually and intensely escalated into an examination of society, where the definition of immorality is blurred during a time of insurgency.  And in fact, the film does discuss the subject of immorality from various paradigms. When does adultery become acceptable, and to whom? Is sexual liberation more heinous than murder? Why is immorality always a double standard? The film plays out the ideas in endless games. Or are they really games at all? Lana could have stopped there, but he didn'
Read more 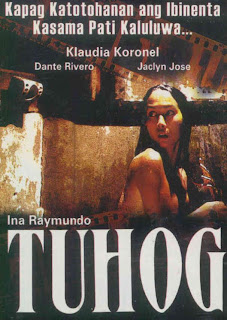 Film within a film-structured movies are always interesting watch. Not only do they provide a much-needed deconstruction of form and content of cinema itself, but also that much-needed emotional punch a cinephile would surely love.  Like in BAD EDUCATION (Almodovar, 2004), we witness the characters tell the back story via montage, as if we are part of the cast of characters watching an actual movie. The form was successful in evoking pain and regret, and also of empathy. In TUHOG, Jeffrey Jeturian and screenwriter Bing Lao tackles sensational media in the Philippines, especially in cinema. The film opens as a film producer hears a pitch for a possible movie- a story of a grandfather who rapes his own granddaughter.  The director of the film soon after visits the victim of the crime, Floring (Ina Raymundo). Coercing both she and her mother, Perla (Irma Adlawan) to sell them the movie rights to their story, we witness as exploitation cinema unfolds. To think of it, capitalizing on ta
Read more 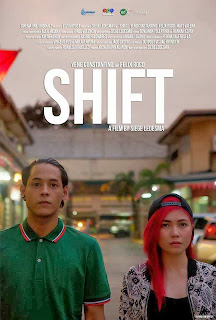 Estela Alano (Yeng Constantino) doesn't find joy and fulfillment in her work as a call center agent anymore. That is until a senior agent, Trevor (Felix Roco) is assigned to mentor her, and Estela quickly and unknowingly gets attracted to him.  Trevor is fun to be with.  A great confidante. Humorous. Charming. Thoughtful. Estela is head over heels. Suddenly, work became really interesting with Trevor around. Estela may have found the perfect man: emotionally available, tender, and loyal. The only catch is, and Estela is perfectly aware of this- Trevor is gay.  SHIFT, the film debut of singer/musician Yeng Constantino is the film of our times, vividly defining an industry that has become indelible with modern Philippine culture, as represented by Yeng's call center agent character Estela who like many others of her real-life counterparts, is currently on a path of self-discovery.    This is where Estela encounters a sexual awakening, one of the many hardship
Read more